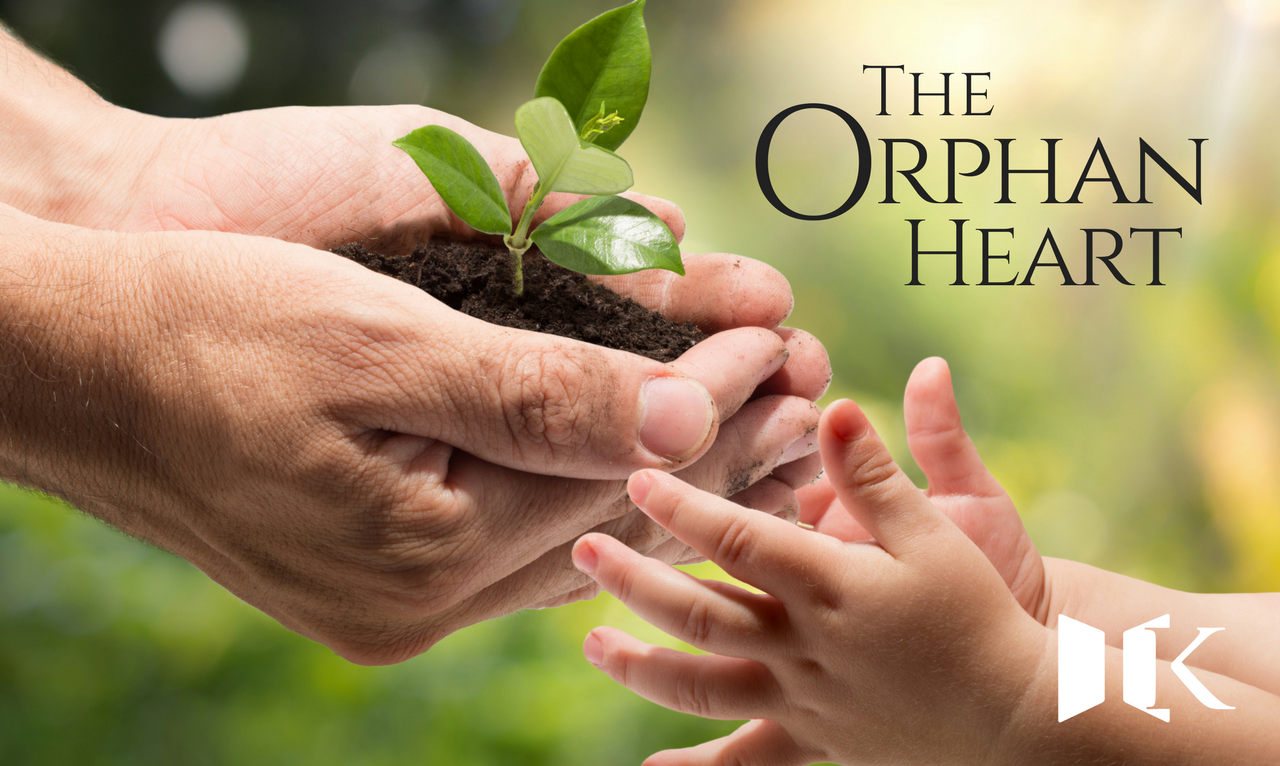 Simply stated, the orphan heart is a learned behavior that becomes entrenched in the internal paradigm or mind-set. The source of this is deep wounding that most commonly occurs from the father. These deep wounds release a host of emotions in the soul that ultimately separates the child from the identity, security, sense of destiny, and purpose that, by design, are to be instilled by the father.

One definition of an orphan is, one who has been deprived of a parent or parents by either death or desertion. In the Greek, the term is orphanos and is translated parentless, fatherless, and comfortless. It figuratively speaks of one who is bereft of a teacher, guide, or guardian.

In Jesus’ day, it was customary for Hebrew children to have an assigned rabbi who was responsible for their training. If that rabbi were to die during the training of the child, the child was considered orphaned since no other rabbi would take the child to complete the training.

This is why Jesus told His disciples prior to His departure that “I will not leave you orphans; I will come to you” (John 14:18). He wanted them to know that He was not leaving them orphaned!

Believers who are plagued by The Orphan Heart are those whose hearts are separated from acceptance, love, and security even in the presence of a church family who extends love and belonging.

Their hearts are longing to belong but have the inability to do so. They have a disconnect in their souls that prevents them from engaging and trusting others.

Even as followers of Christ, they are unable to acknowledge or submit to authority, instruction, or direction from the fathers and mothers of the faith who love them. Their hearts are deeply damaged by abandonment, rejection, and/or abuse from those who were supposed to love, nurture, and bless them, yet failed to do so.

The orphan-hearted person is one who heart truly longs to belong, but have the inability to do so. They have a disconnect in their soul that prevents them from engaging and trusting others.

Because the orphan-hearted feel lost in life, they experience isolation, loneliness, and lack of identity. There is a continual search for the answer to the basic question, “Who am I?”

Without a father to establish true identity and purpose, they wander throughout life in search of true identity. They look for someone who has their perceived qualities of a father or mother and then try to emulate them. They often exhibit mannerisms, dress, and even personality traits in an effort to connect their lonely hearts to a parent figure they wish to be like.

The orphan soul is filled with feelings of worthlessness, rejection, and sadness. This is especially true of those who have been abused or abandoned by a parent.

The orphan-hearted receive the message that their lives are unimportant and their contribution to the family is neither wanted nor needed. In short, they view themselves as undesirable of those who are supposed to love them, thus producing profound sadness and a sense of insignificance.

Rejection, abuse, and the loss of worth create intense insecurities that strike fear into the core of the orphans’ souls. Peace is unseated by torment, and hopelessness takes charge of the mind-set.

Orphans will always see the glass half empty and have great difficulty surrendering their souls to the Father, even when taught that He is loving, caring, and nurturing to all believers.

Orphans have been deserted by those who were supposed to love and care for them. Therefore, they purpose to never allow themselves to be hurt again by those who call themselves fathers and mothers.

There is a deficit in the trust level of those in authority because of the deep wounding. Because of this, orphans will reject order, especially God-appointed order, since ultimately they see God as a tyrant taskmaster rather than a loving, caring Father.

The orphan-hearted establish walls to protect themselves from further hurts and wounds. Some have an excellent ability to develop business relationships and yet short-circuit when it comes to intimacy.

There is great difficulty getting close to people. They tend to keep others at arm’s length and find it challenging to maintain long-term relationships. They become anxious when getting too close to people and will even sabotage their relationships in an attempt to protect from personal harm.

Orphans are very self-reliant since they are the only ones in life they deem to be trustworthy. There is little understanding to the notion that God is a provider and a shelter for their lives. Because of this, there is oftentimes an obsession with self-help.

The orphan-hearted embrace self-improvement formulas in an attempt to become better, healthier people, yet rarely experience lasting change since the root issues of the damage to their souls is seldom addressed.

Authority is a four-letter word to the orphan-hearted even though deep inside there is the desire to be free of torments. They often seek affirmation and encouragement from church leaders to feel secure. However, order often equates to control. Therefore, stepping into a setting or system of order, stability, and proper alignment disquiets their souls.

When love is applied to facilitate change and maturation, orphans become uncomfortable. They will often look for the flaw in leadership or church members and use it as an excuse to exit.

Orphans are commonly the church hoppers that despise submission and flaunt lawless behavior within the body of Christ. They commonly claim, “I don’t need you; I only need God.” They remain fiercely independent and critical of any system that operates within an orderly structure.”

When orphans reach out to help others, they are generally seeking attention to feel good about themselves.

The need for love and acceptance within the orphan-hearted is so great that they are easy prey for ungodly soul ties. Orphans will tend to become perfectionists in order to prove their worth and so will work hard if there is a reward of recognition and affirmation. Without this, there is little motivation to serve at all.

When orphans reach out to help others, they are generally seeking attention to feel good about themselves. These individuals are the ones in the church who work themselves to the bone because their work becomes their identity and gives them their sense of worth. Take them out of their job and you strip them of their identity and value.”

Statistics reveal that 90 percent of homeless and runaway children are from fatherless homes [US DHHS, Bureau of the Census]. Many become easy prey for gangs and human trafficking. Seeking a secure environment of love and belonging, they often migrate to gangs or sex traffickers who become a surrogate family.

Orphan-hearted persons will readily pick up the offenses of others. They are very sensitive to perceived injustices and are quick to pick up on grievances against the status quo or established authority, especially God-appointed authority.

In the church, they are those who often undermine or refuse to acknowledge the authority of God-appointed leadership. Their attempt to save those within the body, whom they perceive as blinded or held captive by the control of leadership, is oftentimes the circumstance that exposes their wounded heart.